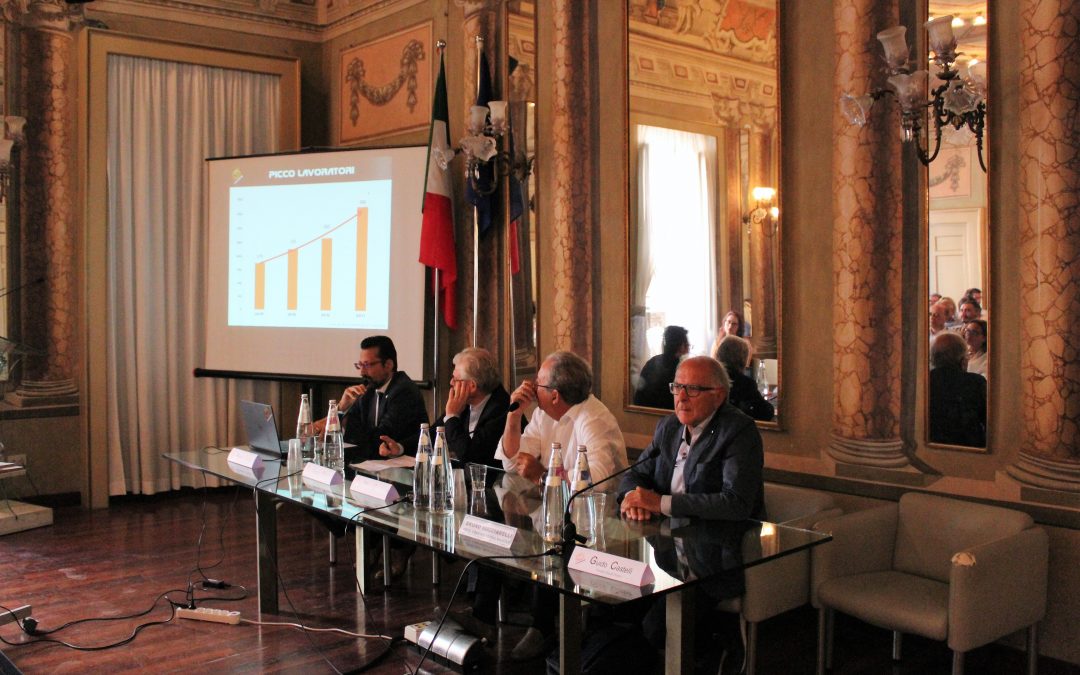 The company, set in the Piceno area, is growing faster and faster, reaffirming its global leadership in composite materials.

The increased turnover and the resources deployed contributed to strengthen the international renown of HP Composites, which became a brilliant example in the Marche region, providing a unique industrial-technology know-how in the whole territory.

Less than a year after the earthquake hit Marche region, razing to the ground a lot of built-up areas and commercial activities, surrounded by the economic crisis that is becoming more and more severe, at a “difficult” historic moment, there is still hope. That hope is coming from the Piceno territory.

After becoming the world’s leading manufacturer of carbon fiber-reinforced composite materials, HP Composites continues its unstoppable drive to its next goals.

A particularly complex and niche sector that of composite materials, where HP has brilliantly emerged and is considered to be the “flagship” of made in Italy in the automotive and motorsport market. A standing appointment for HP, which, roughly one year ago, was showing its results far in contrast with the current trends in economy.

HP is a running car that does not seem to want to stop but who wants to carry on growing conscientiously, respecting its engagements and its philosophy. The most striking example of its work? The building of a third plant on a total area of about 4,500 square meters that would be added to the two other plants covering an area of approximately 14,000 square meters. Construction work has already begun thanks to the support of the Entrepreneur, M. Maurizio Borgioni, who renewed his trust in HP and in this project.

Local third companies are working to set up this new structure. Upstream, HP made a careful evaluation deciding to choose local suppliers and so offering these companies a great opportunity for growth and thus encouraging the local economy.

This resulted in a strong increase in turnover over the last few years. Only in within the first half of 2017, HP has already reached € 2.2 million, a result that differs little from that obtained at end of 2016.

The company’s balance sheet continues to show a positive trend. In fact, 2016 closed with a turnover of about 23 million Euros, up by 27%.

To date, the results are almost the same. In the first half of 2017, the company recorded an increase of 30% compared to the results obtained last year.

At the same time, production figures are also growing rapidly: over the last three years we have manufactured around 916 chassis with production peaks of 2 chassis per day. For non-professionals, it may be a small number, but you should remember that HP’s structural components are entirely hand-made. The know-how, the meticulous work of skilled and experienced hands are the added value that makes the excellence of our products. Its features have won the challenge of competition and today it is estimated that HP produces chassis and structural components for approximately around 1,500 cars, distributed throughout the world market.

Experimentation and growth are HP’s master-words. And it is thanks to this philosophy that, Carbon Mind, a new Start Up dedicated to the research of new technologies on advanced composite materials, is born under the direction of the engineer Alessia Nardinocchi.

An engineering services company, but also an incubator of ideas. The company will mainly focus on the industrialization of both processes and products, the optimization of production flows, on virtual simulations of processes through CAE systems and on technological innovation.

The challenge, however, is to enter the market of industrial design and fashion design through an innovative approach, in order to promote unconventional projects and thus realize new unique objects in composite materials, in large or small quantities.

The close tie with its home country and its rapid growth are the key nodes for HP which, along with other 13 companies, has decided to promote a large-scale project. The “Pole of composite materials” is thus made up of a panel of companies operating in the fields of mechanics, engineering, training and composite materials.

The main objective of the program is to highlight and provide a systematic and structured network of collaborations and relationships between companies based in Marche and Abruzzo regions. The purpose of this network system is to revitalize these collaborations in order to create both a system for strengthening ties and trades and establish a common path of growth. This “consortium” will allow us to have easier access to regional, national and European funds, to participate in calls for tenders and to benefit from economic incentives. The creation of a vertical supply chain between firms would, of course, contribute to improve individual and collective long-term performances.

A sort of global economy advocating other companies in the region to join this panel would see the light of day. A dense and ambitious program that will allow a significant development of the territory.

This year too, HP took part in the last edition of the 24 Hours of Le Mans, the biggest car race in the world, which celebrated its 85th anniversary this year. The bodywork and chassis of 38% of the vehicles deployed on the Sarthe circuit for LM P1, LM P2 and GTE categories were produced by HPC. The made in Ascoli was once again the great protagonist of this edition. On the podium? LM P1, Porsche 919 Hybrid Earl Bamber, Timo Bernhard and Brendon Hartley for which HP Composites manufactures several body parts.

Le Mans was also the ideal setting to present the racing world news. An opportunity that Onroak Automotive was able to seize by unveiling, two days before the competition, its new Ligier JS P4. Introducing the brand? No need. Jacques Nicolet, the “gentleman driver” who became the manufacturer and majority shareholder of HP Composites, raised the curtain on this new sports prototype.

The new Ligier JS P4 adds to the range of cars already manufactured by Onroak and HP. This closed sports-prototype with a carbon monocoque will be homologated in the FIA Free Formula Racing Cars (Group E) category, and will place itself in the endurance chain between the CN and the LM P3.

The Ligier JS P4 won’t be restricted to test days. It will be eligible to race in various national and international series such as the V de V Endurance Series, the 24H Proto Series and the Sprint Series, but also the GT & Prototype Challenge, the 25 Hours of Thunderhill and the 12 Hours of Abu Dhabi.

HP Composites, continuing their collaboration with Onroak Automotive, will supply all of the composite structural components, as well as the bodywork’s carbon elements. HP President was not a mere spectator of the competition. Jacques Nicolet raced his ninth 24 Hours of Le Mans in the LM P2 category, driving the new Ligier JS P217 number 33, lined up by Eurasia Motosport, teamed up with his son Pierre Nicolet and his faithful friend Erik Maris. His race ended with a 13th place in the category.

HP has great ambitions for its future, which it will achieve thanks to the extraordinary strength of will that characterizes its members and operators. Over the next five months HP plans to make various investments to upgrade its infrastructure and purchase new machines, for a total amount of approximately € 2bn. Several are the initiatives that it intends to implement: above all, the alignment to the principles of the emerging 4.0 Industry.

Its goal ? Becoming a leader in the mass production market while maintaining its leading position in Motorsport, which is at the core of the brand’s DNA. A forward-looking strategy that will lead the company towards the industrialization of composite material processing. A project involving several automobile manufacturers such as the FCA group (Fiat Chrysler Automobile) for the automotive and/or Porsche, Dallara, Ligier, Spark, Tatuus, Michelotto for Motorsport. But in order to accomplish a project of this size, many other resources will be needed.

The real asset that characterizes our company is the umbilical and carnal bond with our land. Right after the earthquake that struck the region in August 2016, HP made every effort to provide concrete support in such a difficult time.

A gesture dictated by the deep desire to prevent the flow of talents and potential resources that regularly occurs in these cases.

A course dedicated to people from the affected areas was activated in record time and led by our training schools, Ecodime Italia and TCA (The Composite Academy). Approximately 67% of the young people involved in this project were then hired and are now working in our buildings.

In the last three years, from 2015 to the first half of 2017, we have activated 12 specific training courses addressed to internal and external staff, with the participation of approximately 267 people, much of them are still working in HP.

Since 2015, the activation of internships has enabled us to hire 50 new employees; a number that keeps increasing. The last three years assessments show a record number of hiring 2016: since 2015 we have hired 127 people, of whom 108 were hired at the end of an interim contract and 19 received a specific training. To sum up, HP now has 350 employees, all living in Marches (235) or Abruzzo (99) regions.

“In these difficult years, we provide concrete answers to the crisis and to unemployment,” says the engineer Abramo Levato, the General Manager of the company. “When people talk about HP Composites, it is mainly to highlight the added value of our staff and work, an essential condition of human dignity “.

A great opportunity for HP and for the regional economy more in general, came in May when the region announced the activation of the “Area di crisi del Piceno” (the Crisis Area of the Piceno), which, beyond a certain number of other advantages, will allow to hire new employees. An opportunity not to be missed for HP who hopes to hire 60 people within the next three years.

On this day dedicated to its successes and the results obtained, HP teams address a special thought to their colleague and friend Paolo Volponi, who died recently, and congratulate his work, a capital contribution in achieving these results.